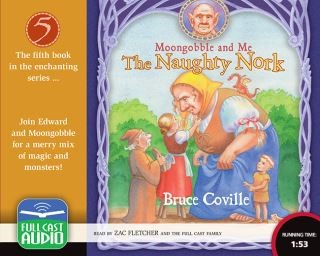 Some kids bring home puppies or kittens. Edward has brought home a monster named Oggledy Nork. The thing is, Edward explains to his mother, Oggledy Nork isn't really a monster. He's just under a curse. With the help of his friends Moongobble the Magician, Urk the Toad, and Fireball the Dragon, Edward sets out to break that curse. Their quest will take the little band to Flitwick City and the Society of Magicians, then on to the Forest of Night, and finally deep underground where they meet a weird creature called the Dangly-Boo and enter the Temple of Toadliness. Discovering where the curse really came from, and how everything finally works out, makes for another magical adventure, both funny and scary, that will delight the entire family.