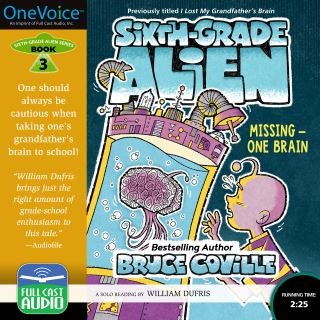 Purple and perplexed, Pleskit Meenom needs advice on how to deal with the challenges of his new life on Earth. Normally he would ask his best friend, Tim Tompkins, but the two boys have been tricked into a feud. So instead he turns to his Grandfatherly One – or, at least, the brain of that wise old man, which is all the family has left of him. But perhaps the Grandfatherly One is not as wise as they all would like to believe, since he convinces Pleskit to take him to school in the portable Brain Transport Device. And that's when things really start to go wrong . . . The recording was dubbed "rollicking!" by AudioFile Magazine, which said the narration by William Dufris' "brings just the right amount of grade-school enthusiasm . . . his youthful voice is well suited to the age of the main characters as he captures the emotional ups-and-downs of an 11-year-old's life."