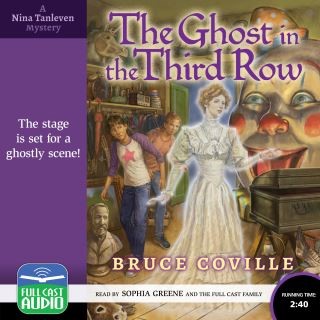 The Ghost in the Third Row

For sixth-grader Nina Tanleven, trying out for a part in a play is pretty scary. But nothing can compare to seeing a ghost, a woman in white, sitting in the audience! Nina senses that she has nothing to fear from this apparition, but she is intrigued. Nina learns that fifty years ago, a beautiful actress was murdered--on this very stage! According to legend, she has haunted the theater ever since....
Strange things begin to happen---scripts are ripped up, sets are knocked down, a costume is torn to pieces--and everyone thinks that the ghost wants to stop the show from going on. Everyone, that is, except for Nina and her best friend, Chris, who decide to do some ghost hunting of their own. But only the Woman in White can lead them to the answer!